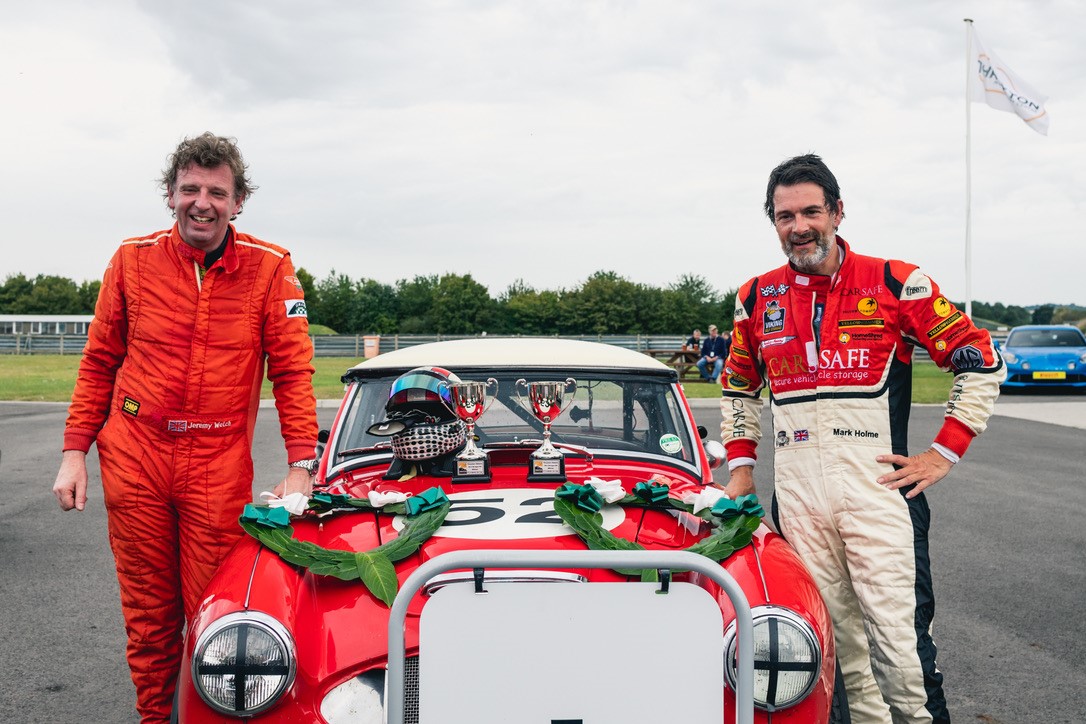 In the cars first outing under new ownership, Mark and race partner Jeremy Welch secured P1 in what was a thrilling race.

With an hour and a half of hard racing ahead of them on an abrasive surface, tyre wear was very much a talking point on Sunday morning, particularly when it became apparent that the race was likely to be dry. That threw fuel conservation into focus, for with sustained high revs and no refilling permitted some competitors had been banking on at least a shower [which had been forecast] and/or a safety car to get through.

Adams’ crew brimmed the diminutive Lola’s primary tank with 21 litres of petrol and 18 in the other one and did not run the engine up in the assembly area, so as to save every drop. Relying on a slow pace lap and warm ambient temperature to prime its alloy Climax engine, Ben controlled the pack prior to the start signal and was content to let Ahlers lead initially and let the eager Holme shoot past from row two while he settled into a rhythm and endeavoured to steer clear of trouble.

At the end of the opening lap Ahlers led long-time VW Fun Cup racer Holme, with Adams third and Muirhead, Harris, Clarkson, Le Blanc heading the peloton. William Paul had moved his gunmetal Jag up strongly from P11 to eighth, ahead of Watson – falling back in his Elan – Fisken, GT2 leader Tim Jacobsen, Pangborn, Sleep, Hanson, Malcolm Paul, Emberson and the rest. The Morley boys started their MGB from the pit lane, having been up to their elbows fixing dad Clive’s Bentley after the previous track activity, Pre-War Sports-Cars’ qualifying.

Holme growled ahead on lap three and gradually pulled away from Ahlers, who was wagging his sleek Morgan coupe’s tail out of the chicane. Adams fell briefly behind Harris, but the big climbers continued to be William Paul and Hanson in their Jags. Former single-seater and Touring Car racer James was flying, indeed he had the carved the #144 coupe through to fifth within five laps. Showing no sign of slowing he displaced Harris and Adams on laps, then Ahlers with fastest lap, then set off after leader Holme.

William Paul was fifth by this point, heading a posse comprising Harris, Muirhead, Fisken and Clarkson, with Sleep closing in at the wheel of his thunderous Mustang in the company of Le Blanc in DD300. Another group in their wake had Pangborn at its head, with Emberson, Jacobsen, Ross-Jones Sr and Malcolm Paul in tow. All entertaining stuff for enthusiasts and car club members watching from the grassy bank between the chicane and the right-left-right complex named for World land speed record breakers of yore Campbell, Cobb and Segrave.

Hanson did wrest the lead from Holme, on lap 12, watched by Adams from close quarters, and Ben slipped the Lola past the Healey to keep tabs on the big Jag. William Paul was the first of the frontrunners to stop, handing his slinky E-type to Butcher as battled raged throughout the field. Muirhead, double-stinting – to facilitate Welch finishing after his planned middle stint in Holme’s – slid back down the order, surviving a lurid spin at the chicane, but picked himself up and continued apace.

Leader Hanson relayed Pochciol Jr after 19 laps and Adams dived into the pits for his first stop two tours later. At that point he had used two-thirds of the bigger tank, according to his crew, so might just get to the finish on fumes. Ahlers thus went back ahead with Harris, Sleep and Fisken – shortly to stop for Clark to take over – and Le Blanc in the chase. Keith and Crispin were supplanted by Bellinger and Wilmoth at 23 laps, whereupon the Mustang led briefly. At its pitstop the heavily-loaded left rear tyre was replaced, as was the norm for the quickest Jags and Healeys at each hiatus.

With the first round of stops done Rory Butcher led, the Scot having already recorded the fastest GT4 lap of 1:30.310 (93.91mph). Half a minute adrift Welch was second, in Holme’s Healey, with Adams third endeavouring to stay in touch. He passed Jeremy on lap 27 when Pochciol, Wykeham in the Shelby and Wilmoth were the only other runners on the lead lap.  Nevertheless, the entire field continued to race towards the one-hour – two-thirds’ distance – mark, a tribute to teams’ car preparation.

Butcher handed Paul back his Jaguar in fine fettle after 37 laps, whereupon Adams retook the lead, extending it to 1m26s when he made his second stop three laps later. Now the intrigue ratcheted-up, for when Ben returned to the track he was 19 seconds behind Paul, with Bellinger between them in Ahlers’ Morgan. As Billy homed in on William it took Ben six laps to hound them down and a further two to re-establish himself in the lead, just after Bellinger put his car owner back in.

On lap 51 though Paul’s car did not come round. Unbelievably to Martin Greaves and the Classic Performance Engineering team it had guzzled all 90 litres of its petrol. Everybody else went further. Holme thus found himself second, almost a minute behind Adams, and with no prospect of catching him was happy to sustain second, clear of Ahlers, Harris, Sleep and the charging Welch, who had taken over Muirhead’s Healey mid-pack and was eating up car after car in a typically rampant charge.

But there was one final sting. With less than four minutes to run, most of the way round lap 54, the Lola’s engine ran dry too. “We knew at the second stop that we didn’t have enough fuel, so Ben decided to enjoy himself,” said crew chief Scott Young. “We’d done the maths. We needed about 42 litres, but only had 39…”  While Adams was classified 18th his 1:30.138 (94.09mph) was the race’s best.

Thus Holme found himself on the cusp of a famous victory with perhaps five miles remaining. With Ahlers almost 50 seconds behind he calmly drove the last couple of laps, exiting the chicane to a rapturous reception from the DWR team on the pit wall as the chequered flag fluttered. Ahlers/Bellinger finished second and Welch won the drag race to the line to rob the Sleep/Wykeham Shelby of third. Or so it seemed until partner Muirhead was penalised three seconds for speeding in the pitlane, reversing their order. Harris/Wilmoth were a splendid fifth, also on 56 laps.

“I’d been telling Mark to slow down early in the race, but this was a dream result for him, first time out in SMO,” said Welch. While Holme was ecstatic, the glory behind the result lay equally with the team for the victory was far from straightforward. “The gearbox broke in qualifying, so we went back to Newmarket [a 275-mile round trip] last night, took the ‘box out of my other race Healey and came back this morning,” grinned Mark.

Bond/Gray – among three teams to be docked five seconds for speeding in the pits – were classified sixth, ahead of Hanson/Pochciol/Pochciol. On a great day for rorty Austin-Healeys, Le Blanc/van Lanschot, Pangborn/Woods and Clarkson/Smithies completed the top 10, with Emberson/Horsman gaining fast.

Eleventh overall, just ahead of Fisken/Clark, Paul/Bourne won GT2 by a lap from the Jacobsens and Orebi Gann/Lockie. In their midst was the Watson/Cox Elan, meatball flagged when, with Dan aboard in the race’s middle stanza, its lightweight fibreglass bumper moulding shot up vertically without warning, a mounting having pulled out. Once tank taped back into place he resumed, at the cost of positions. Cox’s quickest lap of 1:30.803 was barely half a second outside Butcher’s class best and less than seven tenths away from Adams’ outright target.